Why Next Year Will Be The Best Accounting Year Ever 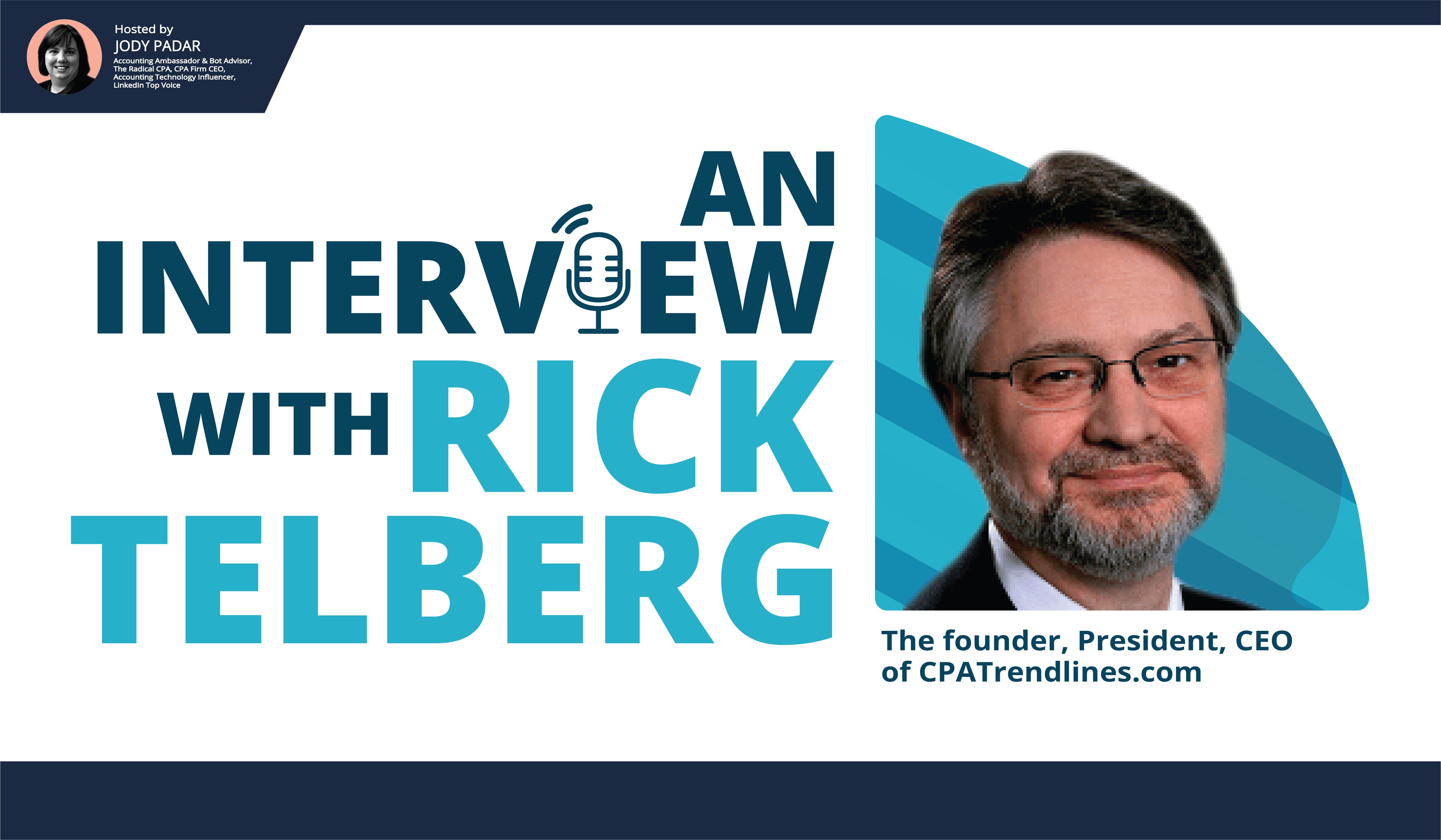 Have you ever thought about how the accounting industry mirrors the complexities of our nation? Well, get ready for that suggestion because The Radical CPA sat down with CPA and trendmaster Rick Telberg to talk about the state of accounting today and next year.

Telberg is the founder of CPATrendlines.com, a data-driven research service for the accounting and finance community. He believes next year might be the best ever for the accounting profession, and the way he talks about it, it sounds like lots of accountants take his side!

Padar and Telberg also talked about how accountants measure value in their firms—and it’s not exactly what you might think. In fact, Telberg suggests that it has a lot more to do with customer satisfaction than with profit. And that’s an idea that we can certainly get on board with!

Click below to listen to the full 14-minute interview, or read on for an edited version of the interview.

Jody Padar: Welcome back. I'm Jody Padar, the Radical CPA, and you're listening to Let's Get Radical live at the AICPA Engage event at the MGM Grand in Las Vegas. There are almost 4000 people here attending, which is kind of crazy. There's an awesome pool outside that is calling my name and we're in the exhibit hall where there's lots of activity. So it's pretty cool.

Our next guest is Rick Telberg and he's going to tell us today why this is going to be the best year ever for accounting professionals. So, Rick, why don't you go ahead and introduce yourself for the listeners. Give us your

Rick Telberg: Thanks for the introduction. It's a pleasure being here and wonderful to get together with you again. CPATrendlines.com is an independent, data-driven research service for the tax, accounting, and finance community. We have about 200,000 subscribers and some exemplary authors, including Jody Padar, The Radical CPA. It's going to be a terrific year. It's already started out to be a terrific year.

They're getting the talent in place. They're doing the deals, the mergers, and acquisitions that they've been putting off during the time when they were learning the new tax code. Now, they're turning their dreams into reality. Next year will be all about execution and reaping from what they sowed this year.

In addition, we'll be coming out of this trough of talent shortage. Don't forget, this is 2019. It was about 2008 when everybody stopped hiring—Lehman Brothers, Bear Stearns, a wipeout on Wall Street. The first plunge we ever saw in the Bureau of Labor statistics in hiring and employment. There were 50,000 resumes on the street in 2009 or so. We starved. We choked off new talent. So right now, we still have a shortage of those senior managers, those tenure people. In another couple, three years, we will have replenished that pipeline. So, I don't want to hear any more about a talent shortage.

Padar: Well, I would challenge you and say that you don't have a talent shortage because automation is going to significantly reduce the need for it. So, if we're using automation the way we should, we shouldn't need as many people anyways.

Telberg: I agree with that and besides automation, we’ve got globalization, we've got outsourcing to all sorts of places. That is now commonplace. And it wasn't 10, 15 years ago. And besides automation and outsourcing, we've got the incredible productivity gains from remote working and mobile working. And I was always skeptical of a talent shortage coming from economics 101 tells me that if there's a labor shortage, it's probably due to the fact you're not paying enough.

So, to pay for entry-level, for good talent in this business has always been a challenge for certain firms. The firms with the talent shortage probably deserved it. I was never very sympathetic with firms that complained about a talent shortage.

So if you're an owner of a firm, it's really a great time to be an owner. Because you've got all these opportunities for leverage and automation and pushing work down/off, taking time off. You don't have to work summers if you don't want to. In fact, I know an accountant in Chicago who told me she wasn't working much during tax season. It's really a very flexible kind of business. So most accountants, especially owners, are making more than they ever have. At the other end, there is a big dichotomy, a big split between those who came out of tax season on the right side of tax season and those who came out on the wrong side of tax season. I've been talking to accountants here, asking about tax season and it's about evenly split. The way they describe their tax season is really interesting. It really goes to the heart of what it means to be an accountant. They describe their tax season in terms of how it affects their clients. They say, "Ninety-five percent of my clients got a bigger refund or paid fewer taxes than they did last year. So we did great. My clients are happy. I'm happy."

I go to the next accountant, and I hear, "Forty-five percent of my clients didn't get as much as they were expecting, and we have a lot of explaining to do. But that means we have a lot of planning to do this summer." And so that's an opportunity.

A lot of where you stand, on how the business is, depends on where you sit. The wonderful thing about the accounting business is that it is as diverse and as various and as multifaceted as America itself. It's a business that runs on its customers. And those customers are real people with real questions and real issues. And they come to accounts with real trust and real needs and accounts take that seriously. So many accountants measure success, interestingly enough, not in terms of money.

How does Botkeeper stack up against the competition? Read Botkeeper vs. ScaleFactor vs. Pilot vs. Bench: Which Bookkeeping Software is Right for Your Business?

Padar: No, it's by how they feel and how they feel their season went and how they help their clients. I would agree with that. I guess it does look good for us, huh? And, you know, it's been great talking to you. But our time has already flown by. So I have my favorite question to ask and I ask it to everybody. What did you do in Vegas last night?

Telberg: I went to bed early. It was a long day. And it's going to be another long day. And they start early here. 6:30 was the first session this morning and I'm not even presentable!

Padar: Thank you, Rick, for being on the show. And the event here has been outstanding so far. We've had lots of great thought leaders we've talked to. We've had lots of cool people and we have lots more to talk to. So stay tuned and we'll talk to you when we get back.

Learn more about how automated bookkeeping can help your firm reach greater levels of success by requesting a demo below.